So today I’m writing about something that I learn’t in my Marine Invertebrates class this semester, and I found it super interesting so I thought I would share it with you!

Portuguese Man O’War, are a highly venomous species of blue bottle. Around the coast of Australia, we have the less venomous cousin of the Portuguese Man O’War, Physalia utriculus. They are part of the phylum Cnidaria, which includes true jellyfish and coral! I know many people think they’re jellyfish, which is sort of true, but they are so much more complex than that!

If you don’t know what I’m talking about the picture below is a blue bottle washed up on shore. 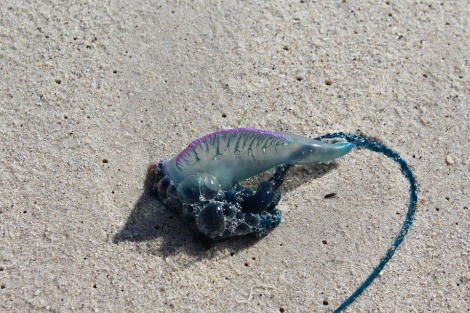 After a quick glance many people think that this is one single animal, but they are actually a colonial species. When talking about colonial species, each individual is called a zooid, and the Blue Bottle is made up of 4 different, highly specialised zooids. First, lets have a look at the bluebottles separate parts.

As the name suggests, this is what keeps the Blue Bottle afloat. They cannot choose which direction they want to go, they just float with the currents. As you can see, it is sort of shaped like a sail, so they do have minimal control on their movements, by changing the floats shape. Half of the population have this sail to the left, and others to the right, which is believed to ensure that only half the population gets stranded on shore in certain wind conditions, while the other is safe! This float is actually part of one individual, and supports all the other individuals in the colony. This is a living, muscular sac that is filled with gas to keep it afloat. The gas that is used in the float is made internally, and is air like in its chemical properties.

These zooids are responsible for feeding and digestion of prey that is caught in their tentacles. They wiggle the prey until it is able to fit into their mouth. The food is digested by the gastrozooids secreting a range of enzymes to break it down.

These make up the tentacles of the blue bottle, that are beneath the surface of the water. The tentacles contain an important single use cells called a nematocyst. They have a hair like trigger, which can detect mechanical and chemical signals. The chemical signals are used to determine if the mechanical signal (something bumping the tentacle) is from potential prey or one of their own species. The nematocyst contains a stinging thread with venom, that penetrates the body of an animal. The threat has barbs or spines which help the thread stay in the prey.

These zooids are specialised in sexual reproduction. Blue bottles are hermaphroditic, which means that each gonozooid will have both male and female reproductive structures.

What to do if you get stung?

As I said, the species that we have here in Australia are not highly venomous to humans, but still hurt quite a bit if you get stung! I have been stung many times, and the pain generally goes away in around 30 minutes.

The treatment for blue bottles has changed over the years. It has gone from rubbing sand into it, to putting vinegar on it, and even to pee on it. These methods are very out of date and shouldn’t be used today. Surf Lifesaving Australia has suggested to remove the tentacles or wash them off with seawater, immerse the sting in hot water until the pain goes away, and try don’t rub the sting.

If you want a visual of all this information, check out this little clip from Blue Planet 2!

I hope this post has showed you just how complex marine life can be, while still looking so simple! If you have any questions, feel free to comment below, email me via the contact page or find me on Instagram @The_BlueScientist.