Todays post is not really #wastefreewednesday related, but I think its such an important message to get out there now that Easter is coming around. I am sure a lot of you don’t know about the detrimental effects that Palm oil has on the environement, or maybe what Palm Oil even is, so todays #wastefreewednesday is all about that. If you already know about Palm oil then thats great, but for those who don’t, here is a little go to guide explaining how it is made, what are the consequences of the Palm Oil industry, and some changes that you can make to minimise or even take it out of your life.

What is Palm Oil

Palm oil is a specific type of vegetable oil that is harvested from Palm fruits throughout throughout Africa, South America and Asia, with most of it coming from Indonesia and Malaysia. It is found in many foods from chocolate, to peanut butter, and is even used to fry some foods. But I think the saddest thing is that it is used in Nutella and Ferrero Rocher chocolates!

Why is it bad for the environment?

In previous years when palm oil wasn’t in such high demand, it was farmed from established fields. But now that it is widely used in so many different products, companies are clearing massive areas of rainforests and peatlands to create new palm oil plantations. This equates to more than 2.4 million acres lost per year to make room for palm oil plantations.

The obvious problem with clearing large areas of land, is the loss of habitat for native animals, and even the loss of plant species that inhabit the area. An example of an animal who has been pushed to the brink of extinction due to this deforestation is the Sumatra Orangutang. They have lost their habitat, and can now be found hanging around in areas where they don’t have reliable food and shelter.  Peatlands are an important environmental biocontrol, by soaking up water from storms, which will reduce the impact of floods. There is also a large amount of carbon stored in the soil in peatlands, so when it is cleared, carbon dioxide is released.

Clearing these large amounts of rainforest can actually have a big effect on the climate, due to something called albedo. Albedo is the ability for a surface to reflect the suns solar radiation. Rainforest have a low albedo, so tend to absorb more of the sun solar radiation. This might seem like a good thing, that if we cut down the rainforest it will have a cooling effect, but rainforests also retain a lot of moisture. So, it might actually make it a little warmer in those areas. There are also possibilities that clearing rainforests in the amazon could change the temperature in the arctic, but this still needs to be studied more before we can say that is the case.

What can you do?

So now that you know a little about palm oil and the effects it has on the environment, the easiest thing that you can do is just to not buy it anymore. Looking at the packaging of products that you buy that you might suspect have palm oil (margarine, Nutella, peanut butter, chocolate, cookies ect.), and if it does, look for an alternative. A general rule to follow, is that if it contains more than 50% saturated fat, the vegetable oil used will generally be palm oil. I understand that the alternatives might be a little expensive, but even if you just limit your consumption of foods that contain palm oil, or leave them as “treats”, then even that is making a difference. There is such thing as buying sustainable palm oil, but I generally think its just better to avoid it if you can, but if you can’t its always a better alternative.

I also feel that now you are more educated on the matter, you might be more inclined to spend a little more money, because it is going to ethical brands, and even though it might not seem like it is making a difference, it actually is. Palm oil is even in many soap brands, so keep an eye out on that, and always double check what your bar soap is made from! 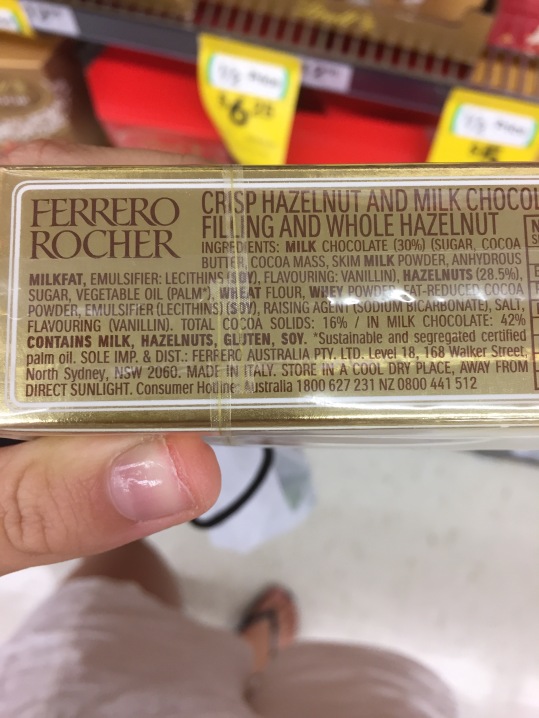 The Nutella actually says under vegetable oil (palm), and the Ferrero Rocher says vegetable oil, but at the bottom after the may contain traces of… it says *sustainable and segregated certified palm oil.

Because Easter is just around the corner, here are some alternative chocolate brands that you can buy this week to make your Easter more environmentally friendly.

So now that you are a bit wiser about the negative effects of Palm Oil, I hope you make some more sustainable choices when it comes to buy your food. And please pass this message onto others, because I sometimes feel that this message gets lost in all the plastic ocean stuff, and even as a marine biologist, I think it is just as important.

If you know of any brands that contain palm oil, or know of any amazing brands that don’t, please let me know on my Instagram @the_bluescientist or flick me an email via the contact page!

2 thoughts on “Why You Should Live Palm Oil Free”